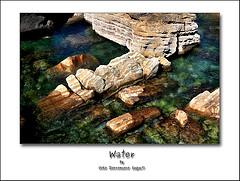 Now, it is necessary to civilize man in relation with nature and animals typical landscapes of La Guajira and the most beautiful works of prominent painters and include the windmill, the donkey traveling on dusty roads and on his back a couple of bottles filled with water, or Wayuu woman with a huge bag inside which is a vase with the precious liquid. A landscape of La Guajira can be added to other peoples of Colombia and the world: long lines of people waiting to fill out a container, tank cars pursued by the mob, animal-drawn vehicles and small vehicles adapted tanks, and parents family on whose shoulders are holding a balance of the ends hang two buckets full of the vital element. In times not far away it was said that whoever sold the water was a ribald. They were certainly other times. Today the water is not only bought and sold but in some cases, no achieved, although there is money to acquire it.

The UN found a few days ago a report that turns all alerts on the problem of water scarcity, not in La Guajira and in Colombia, but throughout the world. In the midst of the figures the analyst can find at least one good news and others (many) very bad. The good news is that at least for now, there is no shortage, water sources are sufficient to supply the inhabitants of all countries in all continents.